Q: I see some “preachers” on campus who spend their time yelling at people and accusing them of sin. Why do they do that? Is that the way we should be telling people about Jesus?

A: We have spoken somewhat of such persons in Fanatics.

Most people who are motivated to go out and condemn people in their sins have developed a theology that conflates the prophetic witness of the Old Testament to Israel with a belief in the United States of America as God’s chosen nation. Such people believe that all Americans should be Christians because God has chosen America; therefore, they are not to be evangelized as if they knew nothing about Jesus but instead as apostatizing and backsliding chosen people.

There is no basis upon which to assert that God has chosen the United States of America in any special way. There is no reason to believe that the United States of America is the new Israel or has been granted a special election. Instead, in the USA, there are righteous people and there are sinners, just as there are in every nation. Those in the world, as sinners, are to hear the good news of Jesus’ life, death, resurrection, lordship, and return, just as in the book of Acts (cf. Acts 2:14-36, Acts 17:22-31, etc.). They are sinners, separated from God; we should not speak to them or presume that they have understanding of God, but exhort them as the Apostles before us did (cf. ibid., Ephesians 2:1-18).

Therefore such is not the way to tell people about Jesus; it is the way to repel people and keep them far away from Jesus and salvation, and thus is truly lamentable. God does not want unbelievers to be condemned and roast for their sins; such is why He sent His Son to die for them, and wishes for them to be saved (John 3:16-17, 1 Timothy 2:4). We do well to love such people and point them to Jesus for salvation and hope! 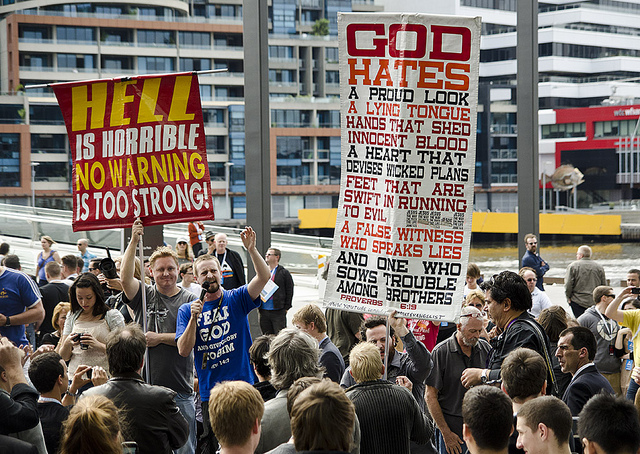